(This is the script of the opening segment for the Jan. 10, 2020 broadcast of Climate Politics. The shows airs on KFCF 88.1 FM from 5-6 pm on the second and fourth Fridays of each month. Hosted by Kevin Hall, the show’s premise is that to respond to climate change, our political climate must change, too. The entire broadcast includes interviews with Kathryn Phillips of Sierra Club California regarding the state’s Green New Deal and Fresno activists Dee Barnes and Mike Rhodes on efforts to block former police chief Jerry Dyer from becoming mayor.)

Welcome to Climate Politics. Today’s show is a mix of the good, the bad, and the ugly. We’ll be doing a deep dive into a bad candidate for Fresno mayor, but before that we get to hear some very good news from Sacramento. The ugly, of course, comes in the form of grim climate news from around the world and another round of scientific studies warning of our rapidly destabilizing atmosphere and the collapse of the ecosystems on which all life depends.

This is no time for the politics of old. We need to be drawing bright lines — right now — between progressive politicians who understand the climate-crisis timeline, and their status quo counterparts. This election is the most important in world history. We must succeed, over the next five years, at laying down the massive policy changes needed to reverse our suicidal course.

Locally, the Sunrise Movement chapter has coalesced and is beginning to organize on campuses and in the community. They’re recruiting people between the ages of 14 to 35. The rest of us are welcome to join, too, just hang back and respect the space they’re occupying and the voices they put forward.

So, everyone is encouraged to go online to Sunrise Movement and join the local hub. While all are definitely welcome, the group points out that they recently held an internal vote and three-fourths of their membership agreed to endorse Bernie Sanders in the Democratic primary. Regardless of that race’s outcome though, the work continues as the movement is building toward a massive day of action on Earth Day, Wednesday, April 22nd, and toward the November presidential election.

Many Californians will be travelling to other states to help in presidential primaries, particularly Super Tuesday in March when more than a third of primary votes will be cast nationwide. But many other Californians will travel here, to the San Joaquin Valley, to volunteer in the congressional district 16 race, where incumbent conservative Democrat Jim Costa is being challenged by centrist Democrat Esmeralda Soria of the Fresno City Council and progressive Democrat Kimberly Williams, a former U.s. State Department official now living in Merced.

Sadly, many well-intentioned people will come here to volunteer for Soria at the urging of Courage Campaign, the highly respected political advocacy group which in its latest advertising has packaged Soria, along with three other candidates, into a glitzy, imitation AOC-style squad. 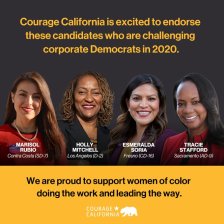 These visitors might have been further encouraged by an uncharacteristically soft, puff piece of an article in The Intercept, the great news organization founded by Jeremy Scahill, Naomi Klein, Mehdi Hasan and others. The reporter left unchallenged Soria’s absurd self-description as a “unapologetic progressive.”

Both groups are completely right on Jim Costa. For my part, I was quoted in The Fresno Bee just last year calling him worse than Devin Nunes when it comes to climate change. Nunes is a denier, case closed, but Costa is a delayer. And that’s worse. I first tangled with him 20 years ago over the mega-dairies coming into the valley, and his disregard for public health and environmental concerns couldn’t have been more clear.

But when Courage Campaign volunteers come here to help save the planet, they’ll be sent to walk for Soria. I encourage them to try the precincts around South-Central Fresno. Two years ago voters from that area came before then-council president Soria & co. for relief from warehouse distribution centers that were being illegally permitted by the City of Fresno; Amazon, Ulta, Caglia. Here are the voices that should not be forgotten, the voices of people living and dying in a sacrifice zone created by environmentally racist policies and votes. These are the people who must be at the center of the climate justice movement but who were ignored by Soria.

Soria is not a racist, not by any stretch of the imagination. But she voted that way. They all did, the entire city council. At best, she was just cowardly joining the crowd, staying in her political comfort zone. Just as she might have been doing when she voted to support putting the slogan “In God We Trust” above the city council dais, I sure hope it wasn’t for personal religious reasons, or when she voted last year to create a developer refund fee program in Fresno, of all places, home to Operation Rezone, and just last month to reopen the Fresno General Plan.

Speaking of which, one final note: just five years after its adoption, Fresno’s smart growth General Plan is being reopened at the urging of sprawl developers. Since its adoption, the majority of the city council has termed out of office and the new members are being led by the nose. Countless hours of work must now be wasted by resource-strapped nonprofits and volunteers in a committee review process that will drag on for months in this crucial election year.

The 17-member committee includes the group of developers who five years ago argued that the city should just lock developers and staff in a room with maps and pencils until they came out with a plan. That’s a plan, course, by which they divvy up the pieces of undeveloped land around Fresno and the new freeways reaching out to them.

It looks as though they’ve got their wish.

Rather than stand and fight it with Nelson Esparza, the only councilor to vote no, and Mayor Lee Brand, who said he’s against it, and to give voters a say by turning it into a campaign issue in the mayor’s race where Andrew Janz is taking no money from developers, Democratic centrists  Soria and Miguel Arias are doing the developers’ bidding. That’s status quo, Fresno politics.